The St Fergus Gas Terminal ("SFGT") is located on the north east coast of Scotland just north of Peterhead. The St Fergus area is the landfall for several major North Sea gas pipelines and the home to the adjacent Shell operated SEGAL gas terminal and the Ancala operated SAGE gas terminal, as well as a National Grid National Transmission System (NTS) facility.

It was originally constructed in two phases to process gas from the Frigg Field – Phase 1 in 1977; Phase 2 in 1978. Phase 3 was constructed to handle the richer gas from the Total operated Alwyn Field which was discovered in the 1980s and Phase 1 was decommissioned. Subsequently, Phase 3 was expanded by the addition of a third gas processing train when the BP operated Bruce Field was developed.

The St Fergus Gas Terminal is one site which services two pipelines, namely;

The capacity of the Frigg UK Terminal at St Fergus is:

Gas processing is by JT valves and/or turbo expander. Liquids handling is by two de-ethaniser trains.

The gas trains are identical and designed for parallel operation. They feature the following operations:

The liquids trains are built for parallel operation, and feature the following operations:

The pressure and temperature of the process facilities are a function of the operating mode. This can be either high or low liquids production, depending on the prevailing economics. 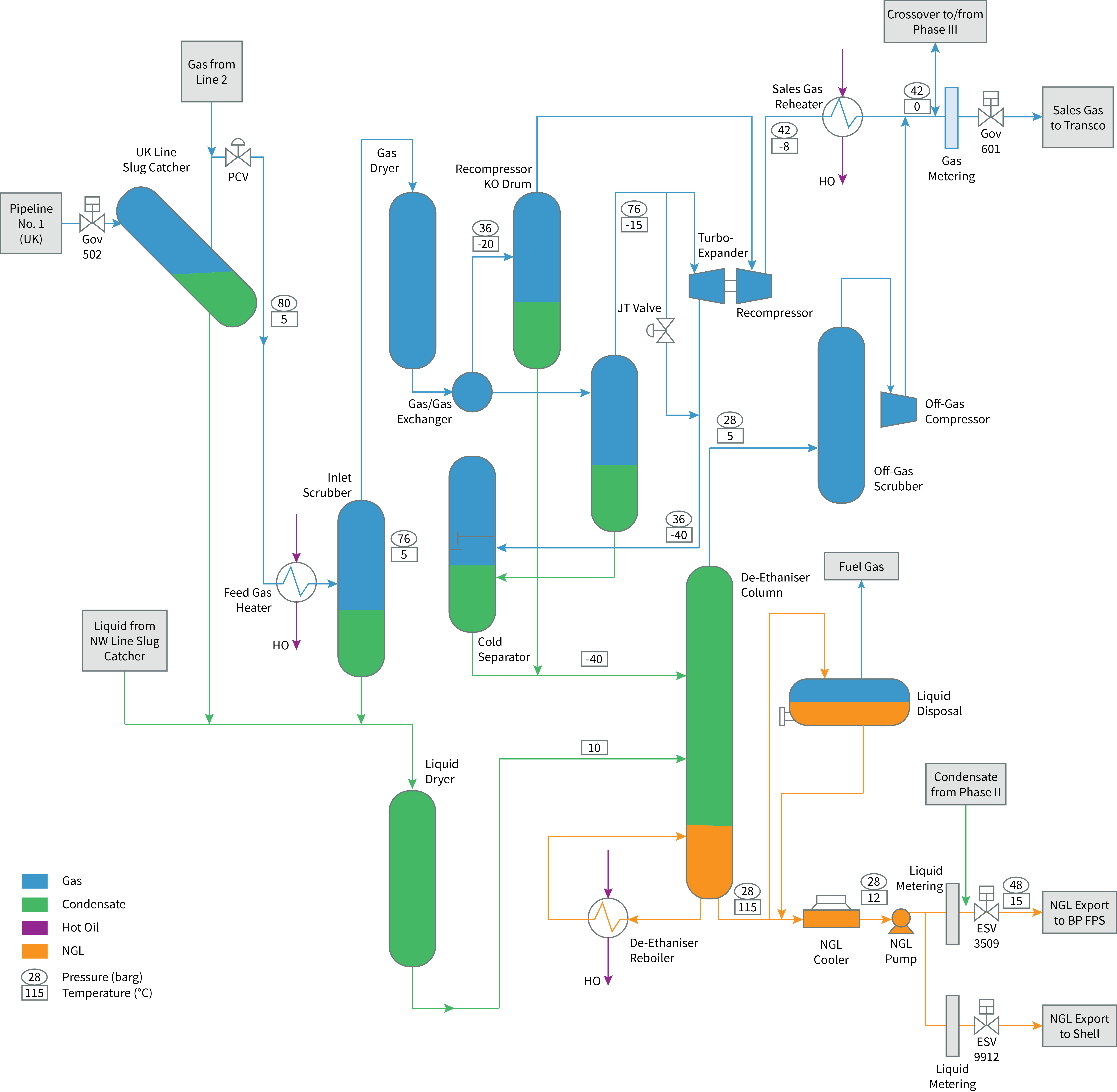 The gas will be redelivered to the National Grid Terminal for entry into the National Transmission System (NTS) in a condition to meet the NTS Specification, with the CO2 content in accordance with the specification applicable to the Frigg UK Terminal (currently 4% mol).

Liquids produced during the processing of gas at the Frigg UK Terminal will be to NGL sales quality. The liquids can be exported to either Mossmoran via the adjacent FLAGS Terminal operated by Shell or to Kinneil via an export line to INEOS's FPS facility at Cruden Bay.

The liquids are processed to meet the specifications for either pipeline in terms of water content, H2S, Sulphur, Methane, CO2, Methanol, Dodecane+, True Vapour Pressure, and MercaptanSulphur.

It is the responsibility of the various FUKA shipper groups to be enter into TPAs with either of the downstream NGL evacuation providers.

The ullage profile shown below is for the FUKA System (pipeline and terminal); the capacity is nominally 1,271 MMscfd but is dependent on pipeline operating conditions and the gas composition of Shipper fields.

The St. Fergus Gas Terminal is justifiably proud of its operational excellence performance and, since commencement of operatorship in 2016, we have achieved a number of significant milestones and awards for safety and environmental performance. Some of these are listed below