FUKA stands for Frigg UK Association which refers to the original development of the cross UK/Norwegian border Frigg gas field – with the 362 km, 32” FUKA pipeline being constructed to transport the gas from the UK part of the Frigg field to St Fergus, with a parallel pipeline constructed to transport the gas from the Norwegian part of Frigg to St Fergus, the Frigg Norwegian pipeline. The pipelines and facilities began initial operations in 1977.

In 2001 with declining production from the Frigg field prior, the Frigg Norway pipeline was reconfigured through a spur connection across the median line to the Heimdal riser platform which operates as a hub for a number of Norwegian gas pipelines. The Frigg Norwegian Pipeline was then renamed Vesterled and in 2003 was incorporated into the Norwegian Gassled joint venture. Vesterled transports dry, sales quality gas to the NSMP St Fergus Terminal where the Phase 2 facilities treat and meter the gas before export to the NTS. The Gassled Joint Venture is the owner of the Vesterled pipeline and Phase 2 facilities at St Fergus Gas Terminal. Gassco operates the Vesterled pipeline while NSMP operates the Phase 2 facilities, both on behalf of Gassled. The St Fergus Gas Terminal has been constructed in three phases; Phase 1 was constructed to receive and process gas from the Frigg UK pipeline before redelivery of processed gas into the NTS and came online in 1977. Phase 2 came online a year later and was essentially the same as Phase 1 but was built to receive and process gas from the Frigg Norwegian pipeline. Phase 3 was then constructed to process NGL rich gas initially from the Alwyn area (commencing production in 1987) and later also from the Bruce field (from 1993). Phase 3 consists of three parallel processing trains each of around 425 MMcsfd capacity.

Following cessation of production from the Frigg field in 2004 the Phase 1 processing facilities at St Fergus were decommissioned and the FUKA pipeline and Phase 1 reception facilities now feed the Phase 3 processing trains, with the FUKA pipeline, Phase 1 reception facilities and Phase 3 processing trains now comprising the Frigg System, which is 100% owned and operated by NSMP. The FUKA system now also transports and processes gas from the West of Shetlands via the NSMP operated, 234 km 30” SIRGES gas pipeline which is described in more detail on the SIRGES asset page.

Today the FUKA system transports and processes gas for a large number of key fields in the Northern North Sea, West of Shetlands, the Outer Moray Firth and in the near future will transport and process gas from the Norwegian Sector. On the pages that follow, you will find information relating to the services provided by NSMP in FUKA. This includes technical information and outlines terms and conditions for the provision of services. 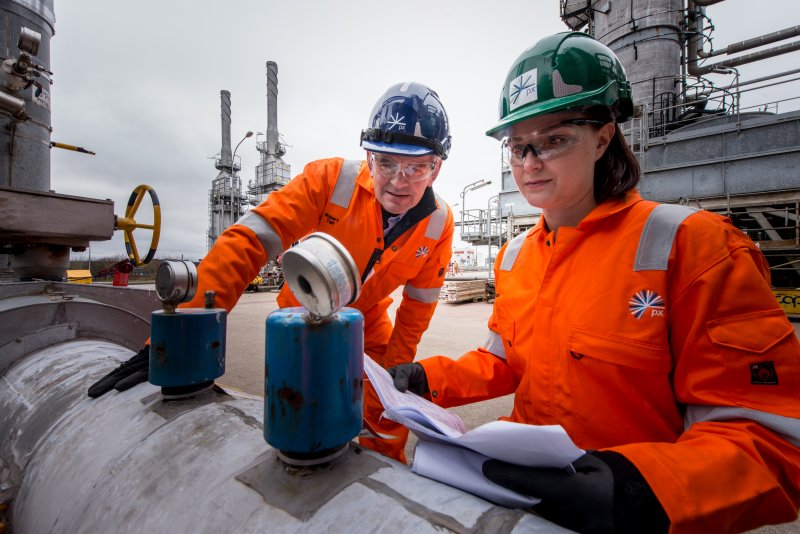 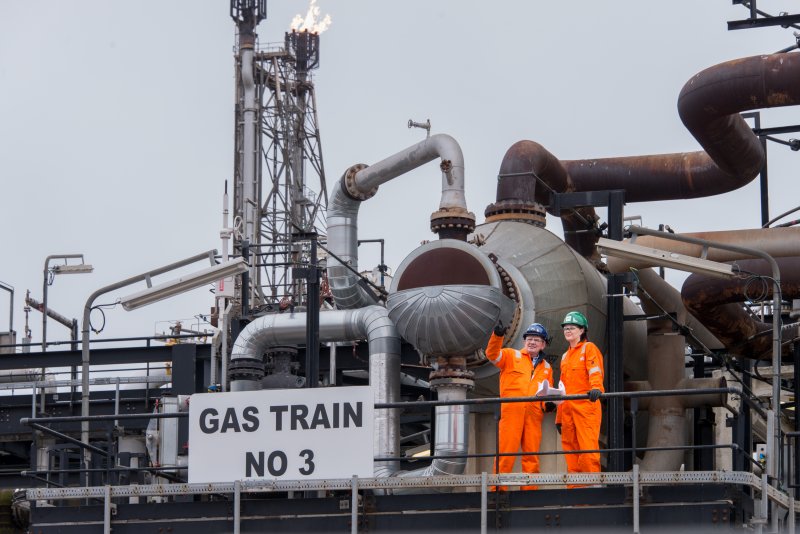 Via the FUKA system NSMP can provide a full transportation and processing service.

There are a number of existing spare tie in points at which new subsea pipelines could access FUKA, further details on the location, size and facilities in place are available to interested parties.

NSMP owns no upstream fields or production and so all business is “third party business” to NSMP - any incoming enquiries will receive swift and focused attention. 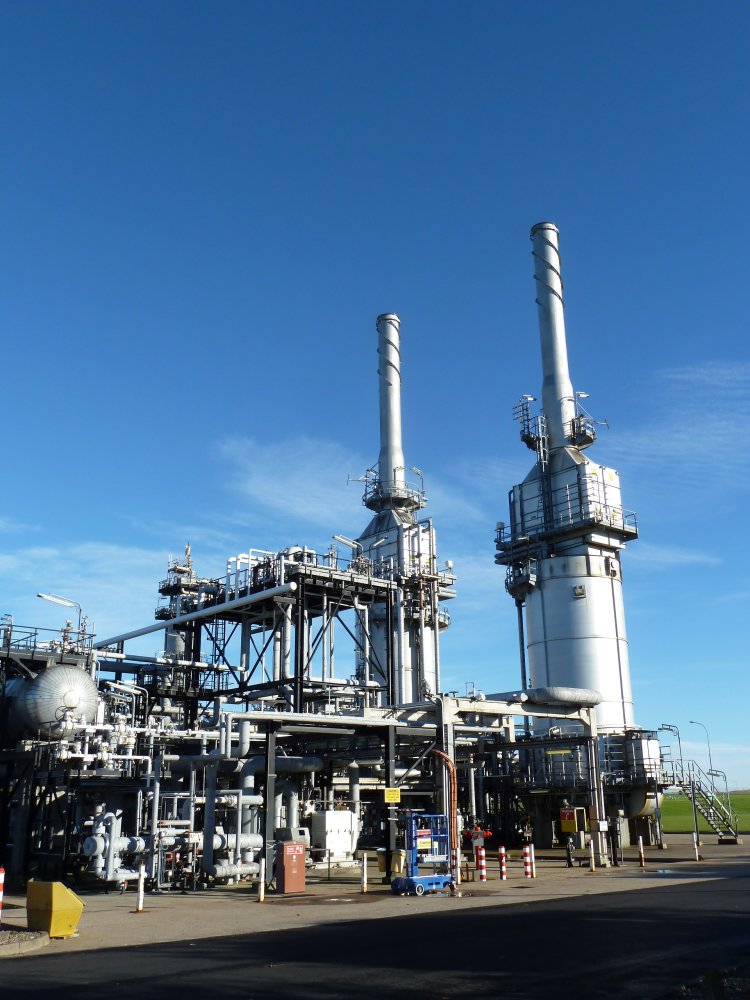 The Frigg UK Pipeline commences at the TP1 bypass spool close to the decommissioned Frigg Field facilities and runs to the Frigg UK Terminal at St Fergus. It was commissioned in 1977 and has been in continuous service since that date. The pipeline is 362km long and is of 32” diameter.

A 32” spur pipeline owned by NSMP connects the Serica Operated Bruce platform to the FUKA pipeline at the Bruce Wye. Technical Details on access to the Bruce Platform can be obtained from Serica Energy (UK) Limited via the attached link. https://www.serica-energy.com/bruce-area-ICOP

The St Fergus Gas Terminal was originally constructed in two phases to process gas from the Frigg Field – Phase 1 in 1977; Phase 2 in 1978. Phase 3 was constructed to handle the richer gas from the Total operated Alwyn Field which was discovered in the 1980s and Phase 1 was decommissioned. Subsequently, Phase 3 was expanded by the addition of a third gas processing train when the BP operated Bruce Field was developed.

The SIRGE pipeline runs from the Shetland Gas Plant (SGP) at Sullom Voe on Shetland to a subsea tie-in on the FUKA Pipeline at the MCP01 bypass valves. 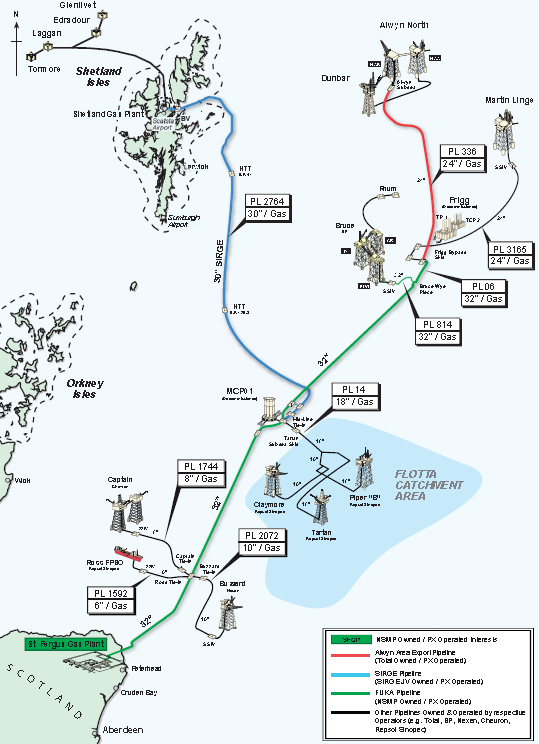 The ullage profile shown is for the 32" pipeline which runs south from the TP-1 bypass spool to the NSMP St Fergus Gas Terminal. FUKA System (pipeline and terminal) capacity is nominally 1,271 MMscfd, but is dependent on pipeline operating conditions and the gas composition of Shipper fields.

Ullage in the TEPUK owned 24” pipeline from the Alwyn North Platform to the TP-1 bypass spool can be found on the TEPUK ICOP website.